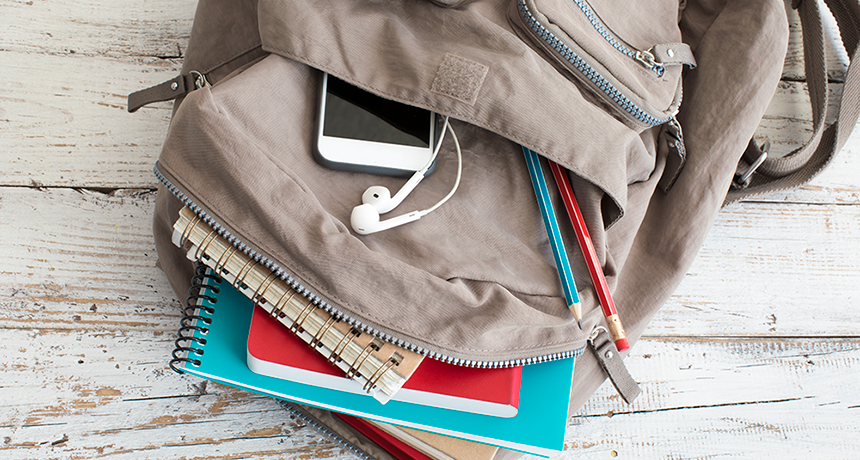 Simply having a cell phone can reduce stress caused by social rejection.

When it comes to health, smartphones tend to get a bad rap. Studies have shown that constant access to social media may foster loneliness, depression and other health problems. But a new study shows that sometimes a smartphone can comfort people in anxious situations, such as when they’re excluded from a group.

The surprise: This benefit comes from keeping that phone handy, but not using it.

John Hunter is a psychologist at the University of California, Irvine. As someone who studies behavior, he wanted to know whether these phones might sometimes improve one’s mental attitude. So he led a team that tested the idea in 141 college students.

As they arrived on the test day, each student was ushered into a room with two other people. The students were led to believe that those others also were participants. In fact, they weren’t. They were part of the research team. They were brought in to intentionally make the participants anxious. 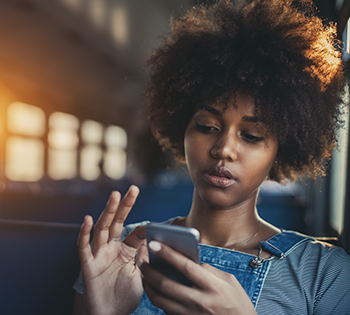 Having a smartphone handy can be reassuring, but actually texting may not keep stress levels low, data now indicate.skyNext/iStockphoto

Researchers had told the students that this study was probing possible links between the size of smartphones and personality. The students answered questions about their phone use, their relationships and their mental well-being. Then the experimenter collected saliva from each of the three people in a room. This was supposed to help connect someone’s “biological profile” with the characteristics of his or her phone.

This left each participant sitting at a small table with the two other people. Those others started talking, supposedly “discovering” things they had in common. In the process, they excluded the participant from their chatting. If the participant tried to join in, they turned away and even said, “That’s not interesting.”

After eight minutes, the experimenter returned and asked the people to answer questions about how they felt right then. This let the researchers know whether being left out of the conversation had made the participant feel rejected, excluded or isolated.

Hunter’s team also wanted to know whether those feelings matched levels of stress being experienced by the students’ bodies. That’s what the saliva samples were for. They were collected not only at the beginning of the trial, but also every 10 minutes for a half hour after the awkward conversation had ended.

Explainer: What is anxiety?

The saliva was tested for two different chemicals. One is a stress hormone called cortisol (KOR-tih-zahl). Produced during anxiety and fear, it’s linked with the body’s fight-or-flight response. That’s what happens when the body ramps up in response to something potentially dangerous. (Getting ready to run from a lion, for example. Or fighting off an attacker.) Researchers often use cortisol to track someone’s anxiety and stress.

The second chemical is the enzyme sAA, which is short for salivary alpha-amylase (AL-fuh AM-ih-lays). Its levels rise quickly during stressful social situations. Some researchers think it might be a better measure than cortisol for certain types of stress.

Hunter’s team used these two chemicals to gauge how much anxiety the students felt after being rejected by the people around them.

Soothed by a smartphone

Students who didn’t get their phones back reported feeling more left out than those whose phones had been returned during the test period. That was true whether or not the students actually used their phones during the experiment. Simply having it on hand seemed to make them more comfortable in the bad social situation.

Phones also were linked to the chemical markers of stress. Cortisol levels dropped in all participants. Whether they had — or used — a phone did not seem to matter.

The sAA levels told a different story. Participants without phones were stressed after being excluded. Ten minutes after the stressful exclusion had ended, their sAA levels were even higher. And sAA values continued to climb throughout the full 30 minutes after the conversations had ended.

Those who used their phones also started off stressed. Their stress levels stayed the same for the entire 30 minute period after the awkward conversation ended.

In contrast, students who had their phones but didn’t use them started off just as stressed. In the 30-minute followup, however, their sAA levels fell dramatically.

“This shows they recovered much better from being stressed,” Hunter explains. Having the phone around basically turned off their fight-or-flight responses, he says. It didn’t turn on cortisol, however. Hunter suspects this particular situation may not have been stressful enough to turn on the brain structures that control the release of cortisol in very anxious situations.

The findings were published in the May issue of Psychosomatic Medicine.

What seems to be happening

Phones appear to help people in two ways, says Hunter. “They distract us from negative things so we feel better,” he notes. And they provide social support. Having your phone around is kind of like having access to your friends and family any time you want it, he says.

Hunter can only guess why people using their phones stayed stressed. Other research has found that people tend to be stressed when texting, he notes. He guesses that some people texted friends or family during the experiment. And perhaps they spent time browsing social media, but not posting on it. People who read other people’s posts but don’t post themselves often experience stress, Hunter notes.

William Chopik is a psychologist at Michigan State University in East Lansing. This is the first study to show that phones can help people in stressful situations, he says. “Technology can be a double-edged sword,” he notes. “And this study demonstrates that nicely.”

Would teens benefit the same way as these college students? Hunter thinks they would. People who regularly use their phones for social interactions would likely feel comforted by having those phones with them, he says. “It’s okay to have your phone with you all the time.” He compares it to a digital “security blanket.” However, he adds, “don’t use it all the time!” Using your phone can be bad for your stress levels and social relationships, he points out.

“Keep it with you whenever you want,” he says. “But only use it sparingly.”

This article comes from the Internet and does not representnew astrological signs dates 2021Position, please indicate the source for reprinting：http://www.cbd-sz.com/29/1721.html
11like
Label:aquarius horoscope 2022 health