NASHVILLE, Tenn. (USA Today) — Last year, an elementary school classmate came out as a transgender boy to Dean Inserra’s fourth-grade son. So, the Southern Baptist pastor turned it into a teachable moment.

Inserra, who leads City Church in Tallahassee, Fla., said he told his son that nothing changes about their friendship, and the loving thing to do was to use the name his classmate preferred. However, at home, the Inserra family would make clear his friend is biologically a girl.

“The two areas that I try to focus on are compassion and clarity,” said Inserra, explaining his parenting approach to a packed conference room on Friday morning (Aug. 25) in Nashville.

He and four other panelists offered advice on how to talk to kids about same-sex attraction and gender identity. The breakout session was a part of the annual conference for the Southern Baptist Convention’s Ethics and Religious Liberty Commission.

“Make a strong distinction between making judgments and being judgmental. It’s a part of Christian discipleship to make judgments … being judgmental is an attitude and we can make sure we keep that in check rightfully,” Inserra said. “I just don’t think you can separate this conversation apart from brokenness.” 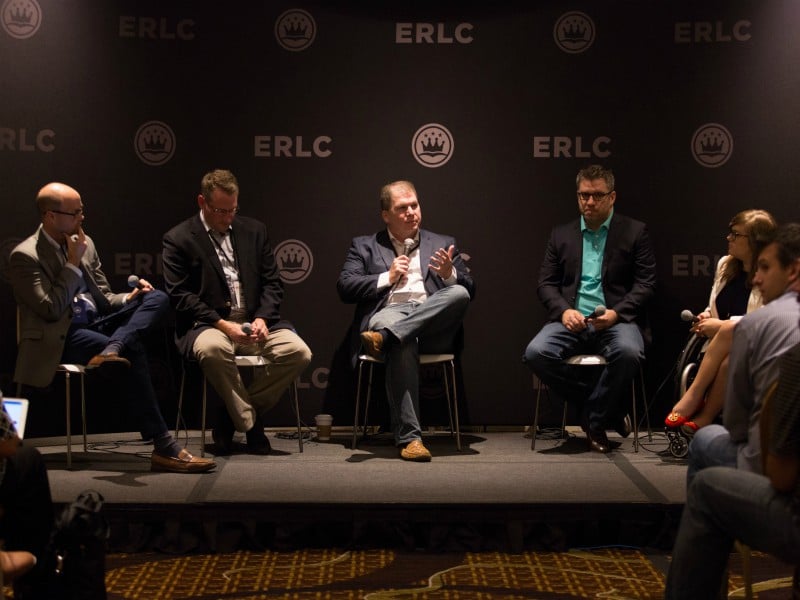 The Ethics and Religious Liberty Commission, the public policy arm of the Nashville-based Southern Baptist Convention, focused its annual event on parenting. It started Thursday at Gaylord Opryland Resort and Convention Center.

Sex and LGBT issues are among a plethora of topics being covered by Southern Baptists and other evangelical Christians. The Southern Baptist Convention’s official positions affirm marriage as between one man and one woman and that gender identity is determined by biological sex.

That’s not a universally agreed-upon biblical view, nor does it align much with larger societal positions. A recent Pew Research report shows that Americans are becoming more accepting of LGBT people and homosexuality.

This is a breakout session. I’m in the overflow room at #erlc2017. Popular session. There are two other concurrent sessions. https://t.co/TdIesL8Nah

Because of that, Inserra’s wife, Krissie Inserra, warned her son about how unpopular their beliefs are, but she urged him to show love even when he disagrees with someone’s views.

“I said, ‘You are now going to be seen as hateful by some people unless you are fully embracing this lifestyle,’” Krissie Inserra said in an interview with USA Today Network-Tennessee. “That is so hard to set your child up to know that in some circles they will be seen as a bigot and hateful.”

There’s about 40 folks here with @faithinamerica. They lightly sang Amazing Grace and are now wishing passersby a good morning. #erlc2017

The Friday morning panel prompted a demonstration from Faith in America, a nonprofit that tries to stop “harmful anti-LGBT religious teachings.” About 40 people stood outside the conference room at Opryland wearing purple shirts that say “Save yOur Kids” and softly praying, singing and trying to talk to conference attendees.

The organization wants Southern Baptists to see their beliefs as harmful to LGBT youth and for all Christian denominations to remove homosexuality from the sin list, said Robert Hoffman, the co-chair and interim executive director of Faith in America.

“I think our strategy at the moment is to just be persistent and to try and engage and use this as an opportunity to make it top of mind in the evangelical culture,” Hoffman said.

With @faithinamerica standing up for LGBT youth at @ERLC in Nashville. #ERLC17 pic.twitter.com/C9TIt59maq

The network of churches is the largest Protestant denomination in America, which is one of the reasons the nonprofit came to Nashville this week. The group brought a similar message earlier this summer to the Southern Baptist Convention’s annual meeting in Phoenix.

At the time, Russell Moore, the president of the Ethics and Religious Liberty Commission, told the Baptist Press that Southern Baptists believe every person is made in the image of God, but they cannot ignore Jesus’ teachings.

One thing was made clear in Nashville this week — children will eventually hear about sex and sexuality issues. So, many of the panelists from Friday morning’s session as well as Thursday evening’s discussion on talking to kids about sex in general urged parents to be the ones to start the awkward conversations.

They encouraged parents to integrate it into everyday discussions early on, answering children’s natural curiosity with age-appropriate truth, pointing it out in movies and addressing it when opportunities arise.

Jeremy and Tori Young, of Murfreesboro, have made an effort to be that reliable and realistic source since for their three children.

“For us, we believe that we have the most real perspective of what sex is and we want to be able to communicate not only the dangers of it being misused but also the beauty of it being used in the right way,” Jeremy Young said.

This article comes from the Internet and does not representnew astrological signs dates 2021Position, please indicate the source for reprinting：http://www.cbd-sz.com/26/1914.html
5like
Label:capricorn horoscope april 2021