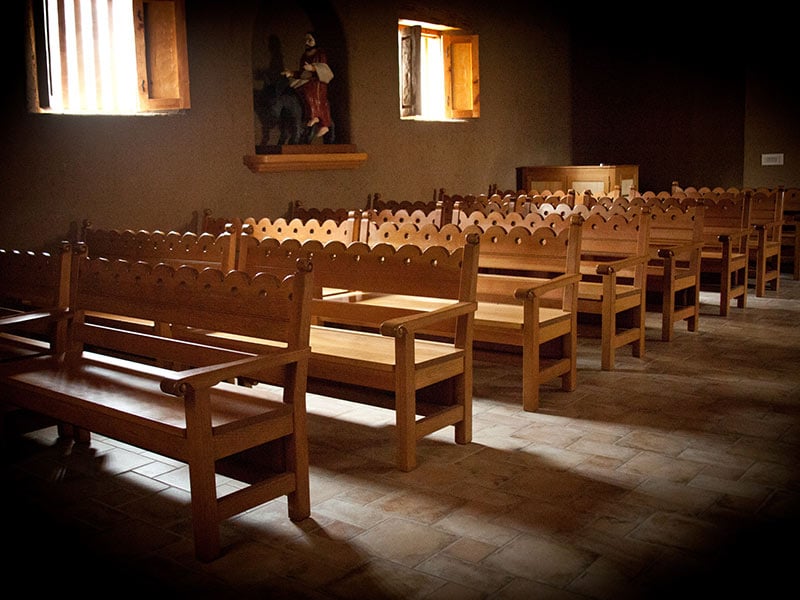 Window light shines on the empty pews of a church in Kansas City, Mo. Photo by Sally Morrow September 6, 2017 By Kimberly Winston ShareTweetShare

(RNS) — The future of religion in America is young, non-Christian and technicolor.

Almost every Christian denomination in the U.S. shows signs of growing diversity as white Christians, once the majority in most mainline Protestant and Catholic denominations, give way to younger members, who tend to be of different races, according to a study released Wednesday (Sept. 6) by the Public Religion Research Institute.

And American evangelicals — once seemingly immune to the decline experienced by their Catholic and mainline Protestant neighbors —  are losing numbers and losing them quickly.

Americans are also continuing to move away from organized religion altogether, as atheists, agnostics and those who say they do not identify with any particular religion — the group known as the “nones”  — hold steady at about one-quarter (24 percent) of the population.

The study, “America’s Changing Religious Identity,” contacted 101,000 Americans in 50 states, and has an overall margin of error of plus or minus 0.4 percentage points. And while the survey spotlights transformations afoot in many religious groups, it also shows a seismic shift for a long-standing American religious powerhouse: white evangelicals. 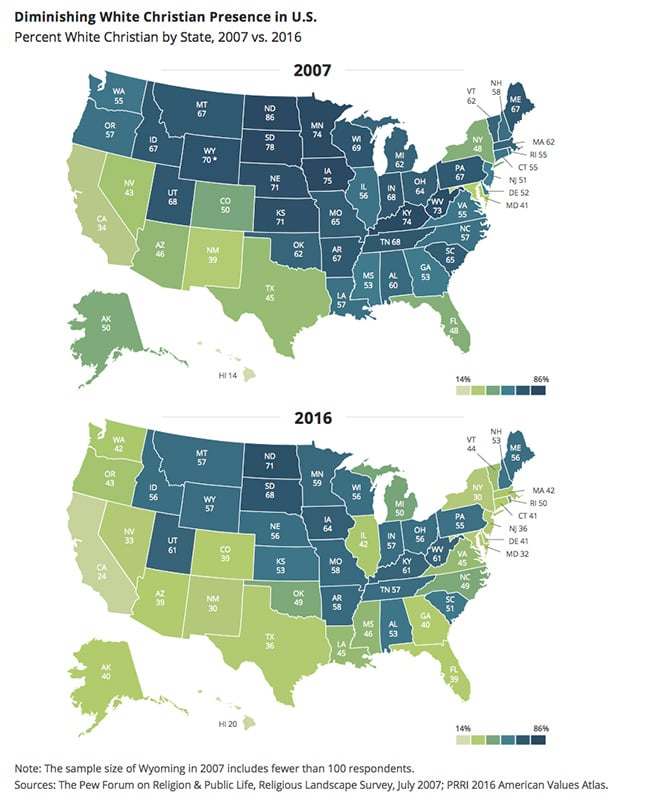 “This report provides solid evidence of a new, second wave of white Christian decline that is occurring among white evangelical Protestants just over the last decade in the U.S.,” said Robert P. Jones, PRRI’s CEO and author of “The End of White Christian America.”

“Prior to 2008, white evangelical Protestants seemed to be exempt from the waves of demographic change and disaffiliation that were eroding the membership bases of white mainline Protestants and white Catholics,” he said.

“We now see that these waves simply crested later for white evangelical Protestants.”

Among the survey’s chief findings:

White Christians, 81 percent of the population in 1976, now account for less than half the public — 43 percent of Americans identify as white Christians, and 30 percent as white Protestants.92 percent of Lutherans are white, more than in any other denomination.White Christians are aging. About 1 in 10 white Catholics, evangelicals and mainline Protestants are under 30, compared with one-third of all Hindus and Buddhists.Muslims and Mormons are the youngest faith groups in the U.S., with 42 percent of all Muslims under 3o, and nearly a quarter of all Mormons.

Daniel Cox, PRRI’s director of research, said senior citizens generally have cohorts who look a lot like them — “nominally white Protestant, and that has been normal throughout their lives.” But the under-30 crowd tends to rub elbows with a more diverse group — including the religiously unaffiliated and people of different races and religions.

“The young are much less likely to believe this is a ‘Christian nation’ or to give preference to Christian identity,” he said. “Young people and seniors are basically inhabiting different religious worlds.”

And while the decline of white mainline Protestants and Catholics has been documented in earlier surveys, the new PRRI survey shows a similar and relatively recent decline among evangelicals — from 23 percent to 17 percent of the public from 2006 to 2016. 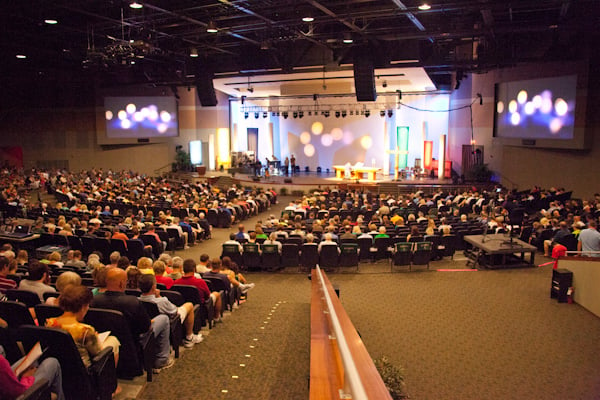 “There is no one explanation, but you can’t answer why without looking at the rise of Christian conservatives, ” Cox said.

Christian activism for many has come to mean conservative activism, working against gay marriage, abortion access and the legalization of marijuana — and young people may be turned off by such positions, Cox said.

“It is no longer the case among young people that being religious is necessarily a positive attribute.”

The survey also shows that religious folks are realigning, both geographically and politically:

The Catholic Church is headed south. A  majority of Catholics now live in the American South (29 percent) or West (25 percent). That’s a reverse from four decades ago, when 7 in 10 Catholics lived in the Northeast or the Midwest.White Christians are a minority in the Democratic Party. Fewer than 1 in 3 Democrats are white Christians, down from almost half 10 years ago. And Democrats under 30 are increasingly less religious — only 14 percent identify as white Christian, while 40 percent are nones.While white evangelical Protestants are losing adherents, they remain the dominant religious force among Republicans — more than one-third (35 percent) of Republicans are white evangelicals, a stable proportion for the last 10 years.

The PRRI survey is broad in scope but also reveals much about the slender slices of American religiosity:

The religious profile of Asian or Pacific-Islander Americans is unusual compared with other racial or ethnic groups, with roughly equal numbers spread across the Christian, non-Christian and no-religion categories.Though atheists and agnostics account for about one-fourth of all the religiously unaffiliated, 16 percent of the unaffiliated identify as “a religious person.”Almost half (46 percent) of LGBT Americans are religiously unaffiliated — about twice as many as the general population (24 percent).

Rabbi Denise Eger, founding rabbi of the Kol Ami synagogue in West Hollywood and an LGBT activist, said the high numbers of unaffiliated LGBT persons should surprise no one. She blames fundamentalism, especially in Christianity, Islam and, to a lesser extent, Judaism.

“The truth is that all of religion becomes tainted, even though there are many denominations that welcome them, that it becomes ‘why bother?’” she said of many LGBT people’s encounters with religion.

Mississippi is the most homogeneous state in terms of religion (60 percent are Baptist) while New York is the most religiously diverse.There are now 20 states in which the religiously unaffiliated outnumber adherents of any other single religious group. Most of those states sit on or near a coast; they include Vermont (41 percent unaffiliated), Oregon (36 percent), Washington (35 percent) and Hawaii (34 percent).

The rise in the religiously unaffiliated means people must now ask old questions in new ways, said Jennifer W. Davidson, an associate professor of theology and worship at the American Baptist Seminary of the West.

“We need to begin asking people, ‘How do you make meaning in your life? What sustains you when you suffer? How do you cultivate a sense of wonder?’” she said.

“It is fully possible to answer these questions from a secular perspective, and if we asked them, we might be able to see abundantly fruitful connections among people who are religiously affiliated, religiously unaffiliated, secular, agnostic and atheist.”

This article comes from the Internet and does not representnew astrological signs dates 2021Position, please indicate the source for reprinting：http://www.cbd-sz.com/19/1834.html
10like
Label:freewillastrology com horoscopes