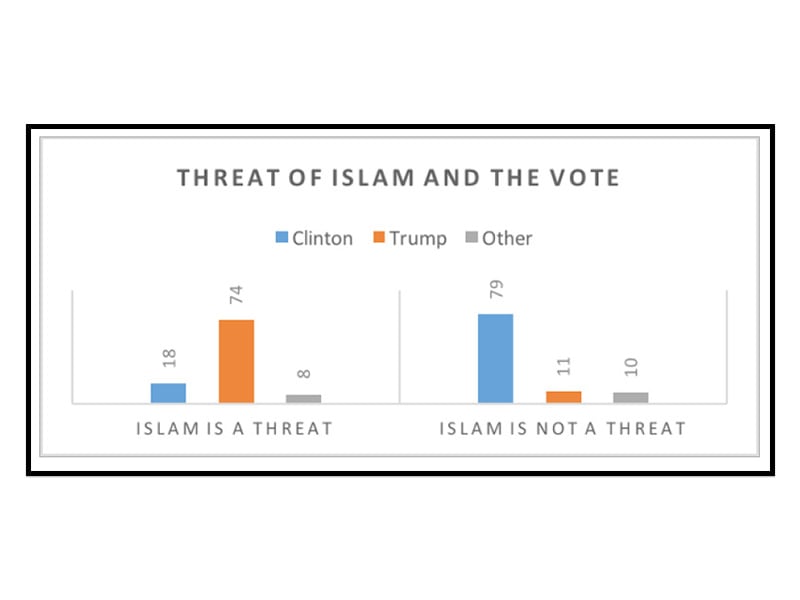 A new Baylor Religion Survey also found that Trump supporters are more likely than other voters to see Muslims as threats to America and to view the nation as a Christian one.

“Today, divisions in the American public are stark,” said Paul Froese, a Baylor University sociology professor and director of Baylor Religion Surveys. “We can trace many of our deep differences to how people understand traditional morality, theology and the purpose of our nation.”

The results of the survey were released Thursday (Sept. 7) at the annual meeting of the Religion News Association.

The authors of the survey describe “Trumpism” as “a new form of nationalism which merges pro-Christian rhetoric with anti-Islam, anti-feminist, anti-globalist, and anti-government attitudes.”

Researchers found that 6 in 10 white evangelical Protestants voted for Trump. Their figure is lower than others — who have found 81 percent of white evangelicals voted for the president. The Baylor calculations are based on the church attended by a respondent, as opposed to other studies in which respondents self-identified as evangelical.

Some people view people of other faiths as threatening, with evangelicals viewing Muslims as the biggest threat and black Protestants viewing atheists as posing the most danger.

The survey, titled “American Values, Mental Health, and Using Technology in the Age of Trump,” also looked beyond politics. On the topic of mental health, researchers found that those who feel “life has no purpose” are the most depressed, even more than those who fear hell the most.

The newest survey from the Christian university in Waco, Texas, is the fifth in a series that dates to 2005. Its findings are based on a random sample of 1,501 adults and was administered by the Gallup Organization in the spring of this year during the first months of the Trump administration. The study has a margin of error of plus or minus 3 percentage points.

Some of its other findings about Americans include:

89 percent disagree that science and technology will make religion obsolete.38 percent of people with no religious tradition said they feel addicted to technological devices; 18 percent each of evangelicals and black Protestants said they feel addicted to them.77 percent never use the internet to share their religious views.55 percent never use the internet to access religious content.47 percent of churchgoers live within 15 minutes of their house of worship.

This article comes from the Internet and does not representnew astrological signs dates 2021Position, please indicate the source for reprinting：http://www.cbd-sz.com/18/1821.html
8like
Label:september 4th zodiac

Paula White: ‘Our president is not a racist’horoscopes june 5