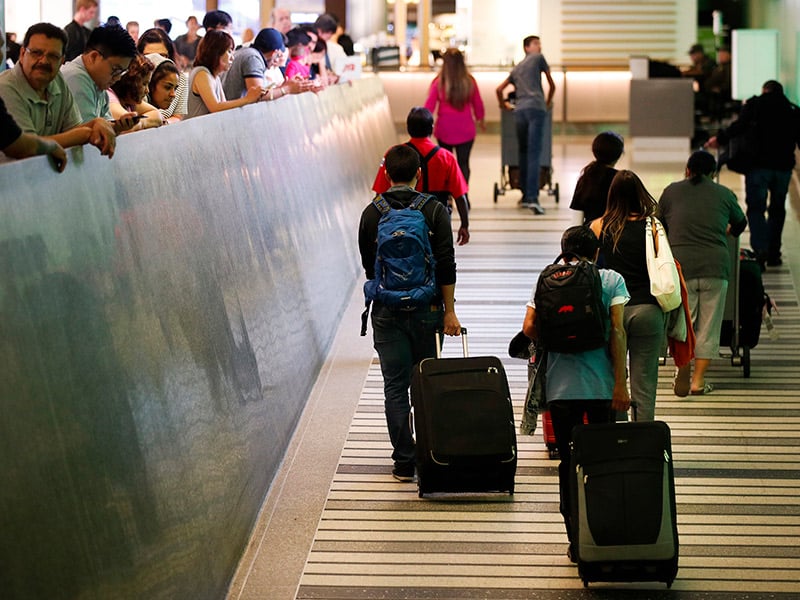 Travelers make their way up the arrival ramp at the Tom Bradley International Terminal at the Los Angeles International Airport on June 29, 2017. After months of wrangling, tighter restrictions on travel to the U.S. from six mostly Muslim nations took effect in June after the Supreme Court gave its go-ahead for a limited version of President Trump’s plans for a ban. AP Photo/Jae C. Hong October 11, 2017 By Gregory Korte ShareTweetShare

WASHINGTON (USA Today) — The Supreme Court dismissed a major challenge to President Trump’s travel ban on majority-Muslim countries because it has been replaced by a new version, sending the controversy back to the starting block.

The ruling Tuesday (Oct. 10) is a victory for the Trump administration, which had asked the court to drop the case after Trump signed a proclamation Sept. 24 that replaced the temporary travel ban on six nations with a new, indefinite ban affecting eight countries. That action made the court challenge moot, the justices ruled.

“We express no view on the merits,” the justices said in a one-page order.

The decision effectively wipes the record clean in the U.S. Court of Appeals for the 4th Circuit, one of two federal appeals courts that had struck down major portions of Trump’s travel ban. That case began in Maryland.

A separate case from the 9th Circuit, based in California, remains pending because it includes a ban on refugees worldwide that won’t expire until later this month. But the Supreme Court is likely to ditch that case, which began in Hawaii, as well.

The challengers in both cases already have renewed their lawsuits in the lower courts, starting the legal process anew. In Maryland, a federal district court has scheduled a new hearing for next week.

But the new travel ban and the Supreme Court’s order vacating the 4th Circuit appeals court judgment puts the administration in a somewhat stronger position, at least for now.

The 4th Circuit case was brought by the International Refugee Assistance Project, which argued that banning travel from six majority-Muslim countries violated the First Amendment’s guarantee of freedom of religion.

Justice Sonia Sotomayor dissented from the court’s action. She would have dismissed the case but in a way that would have preserved the appeals court ruling against the ban, rather than vacating it.

Under its original schedule, the court would have heard the case Tuesday, but the court had delayed oral argument after Trump replaced his earlier order. The new version followed a three-month review of immigration procedures.

The latest travel ban targets five countries included in two previous versions — Iran, Libya, Somalia, Syria and Yemen — as well as Chad, North Korea and Venezuela. Unlike the earlier bans, it treats some countries and types of travelers, such as students or tourists, differently than others.

The administration told the justices last week that the new ban is “based on detailed findings regarding the national security interests of the United States that were reached after a thorough, worldwide review and extensive consultation.”

The ban’s challengers argued that the case against the last version should go forward because many of the same travelers and their families are adversely affected — not just for 90 days, but indefinitely.

The American Civil Liberties Union, which brought the 4th Circuit challenge on behalf of the refugee group, had said charges of anti-Muslim discrimination still applied “despite some new window dressing” — a reference to the addition of North Korea and Venezuela.

Hawaii, which brought the 9th Circuit challenge, warned the justices that  elements of the earlier ban still could be revived, since Trump has said he wants a “much tougher version.”

This article comes from the Internet and does not representnew astrological signs dates 2021Position, please indicate the source for reprinting：http://www.cbd-sz.com/17/1429.html
6like
Label:zodiac sign for september 7th