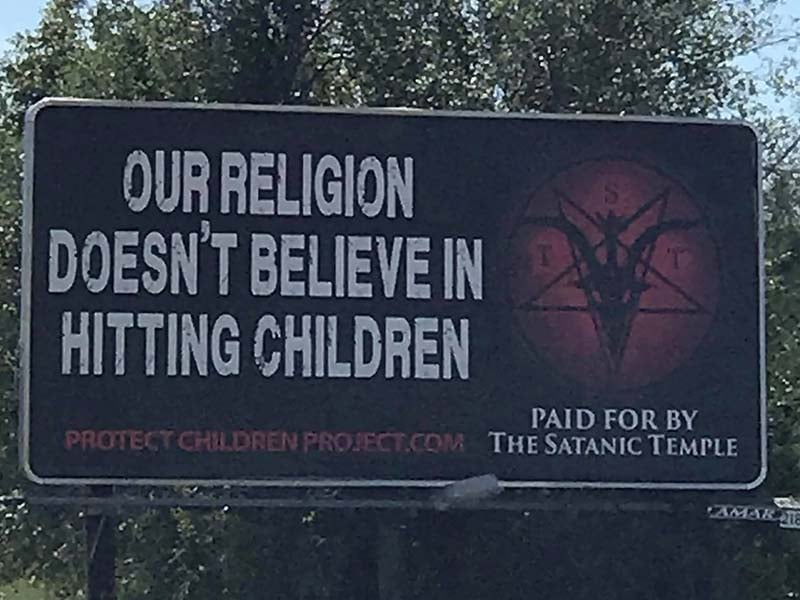 (RNS) — Arther Culpepper, a sheet-metal mechanic and part-time pastor in the South Texas town of Three Rivers, first noticed the billboard out of the corner of his eye.

He was driving south on U.S. Highway 281 — near the local Dairy Queen — when the message caught his attention: “Our religion doesn’t believe in hitting children.”

The sign was paid for by the Satanic Temple, a national group whose Protect Children Project takes aim at paddling in public schools.

Free speech or not, many others in the town of 1,900 — about 75 miles south of San Antonio — expressed shock and outrage at the group’s message, which targets the Three Rivers school district board of trustees’ 6-o vote in July to reinstitute corporal punishment.

“The community is upset, not happy,” said Kevin Mackey, minister of the Three Rivers Church of Christ, which responded on its own sign: “Satan doesn’t own all the signs in (Three Rivers) — don’t let him own you.”

“I’m very sorry that the billboard has been posted in our town, especially in a city park where families and our children congregate,” Means said. “There’s not really anything I can do about it personally except pray for those people responsible for putting something like that up in our town.”

According to the Protect Children Project website, the Satanic Temple “believes that children should not be objects of physical violence or psychological abuse. We have prepared a letter that can be signed by students which informs their public schools that their deeply held beliefs do not allow for them to be hit in school, physically restrained, placed in solitary confinement, or deprived access to a bathroom.”

“Hopefully, our billboard will give pause to passers-by who will be forced to confront the fact that the school district is being operated by depraved and ignorant sadists who have no business being in education,” a Satanic Temple spokesman who goes by the name Lucien Greaves told The Dallas Morning News.

In a statement quoted by The Progress, a local newspaper, school Superintendent Mary Springs said:

“The district continues to focus on the greatest aspect of our work which is educating children and will not have any further comment on this policy,” concludes the statement.

Neither Greaves nor Springs responded to interview requests from RNS.

In the blue-collar community, many work in the oil business — including at Valero Three Rivers Refinery — and most claim a church affiliation, even if not all make it to worship on Sunday, pastors said.

Three Rivers is in Live Oak County, where 81 percent of voters cast ballots for President Trump in the 2016 election.

For many observers, the billboard’s ties to a satanic group spark particular alarm.

“I was just really … in disbelief,” said Francis Muzquiz de Anguiano, a Pentecostal Christian who posted a Facebook photo of the billboard after driving through Three Rivers.

“They advertise they don’t believe in hitting children, but the first thing you think about is, they’ll sacrifice them. It’s really alarming to me as a Christian because they’re being really bold about their beliefs and trying to lure in people from the outside.”

Actually, the Satanic Temple is an organization dedicated to church-state separation — and one whose leaders say they don’t really believe in the devil or Satan worship. Greaves has characterized the group, based in Salem, Mass., as “an atheistic religion.”

The corporal punishment policy enacted by the Three Rivers school board requires parental approval before a school official can paddle a child. Local church leaders interviewed by RNS distinguish between “hitting” and “disciplining” a child.

“Our religion causes us to love our children, and therefore we discipline them,” said Mackey, the Church of Christ minister. “Now, that discipline doesn’t have to be spanking. But it also can be spanking.”

Means, the First Baptist pastor, said: “Of course, no Southern Baptist condones abuse or hitting children. Abuse is different from giving a child, in my opinion, a spat on the seat. Hitting conveys the idea of abuse. Discipline is a word they wouldn’t dare put on a billboard.”

Culpepper, the River of Life Worship Center pastor, declined to respond to the billboard’s message, suggesting that whatever he said would be taken out of context.

But he voiced support for the town’s school leaders.

“I don’t think the school district should answer to anybody except the people they serve,” Culpepper said. “And anybody outside of Three Rivers doesn’t, to me, have a dog in the fight, so why should they even get involved?”

This article comes from the Internet and does not representnew astrological signs dates 2021Position, please indicate the source for reprinting：http://www.cbd-sz.com/09/843.html
4like
Label:scorpio relationship match