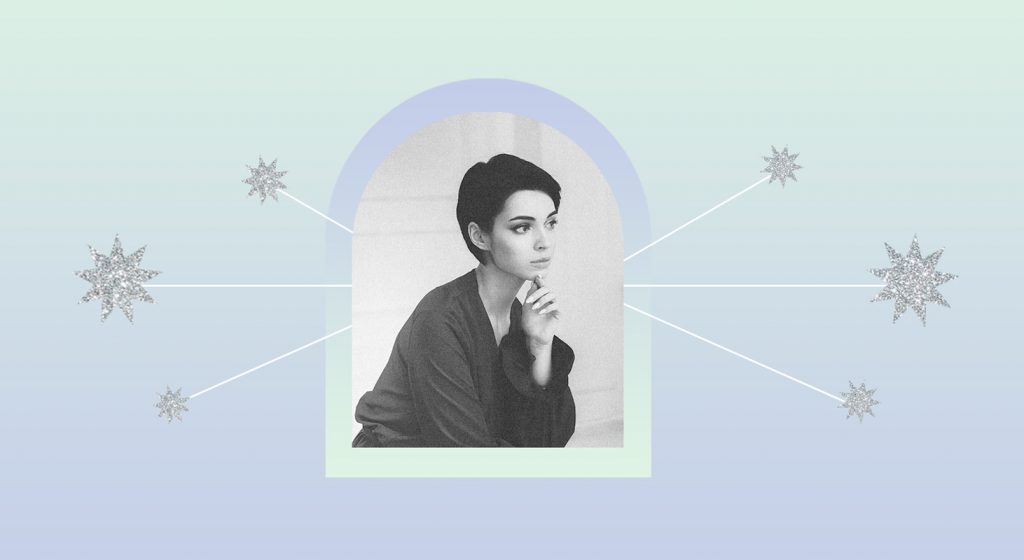 In a certain way, the astrology of June is a continuation of significant events that took place last month. We begin the month right in the middle of eclipse season and just a few days after Mercury started its second retrograde of the year. For these two reasons, June has the flavor of change, but it also comes with the need for revising, readjusting, and slowing down.

The first three days of June could easily be labeled as the most fortunate because the Pisces moon conjoins Jupiter on Tuesday, June 1, Venus enters Cancer on Wednesday, and Venus trines Jupiter in Pisces on Thursday. Also on the third, the Gemini sun is in a trine angle with Saturn. So even though it’s not usually advised to plan important things during Mercury retrograde and eclipse season, these three days in June promise us some love from the cosmos.

June’s astrology vibe gets intense by June 5, when Mars in Cancer forms an opposition to Pluto in Capricorn, putting a damper on what could otherwise be a really positive week. Under this aspect, a lot of us could be feeling the competitive urge to get ahead and assert ourselves. However, let’s remember that Mars in Cancer can manifest as a very angry energy, especially in the very last degrees of this sign. If we can handle this angry moodiness and use Pluto’s drive instead, this transit can be useful for asserting ourselves.

The astrology of the second week of June is quite exciting. The moon is in Taurus, its sign of exaltation, and although it conjoins Uranus and squares Saturn on Monday the seventh, by Tuesday it forms beautiful aspects with Neptune, Pluto, and Mars. While Monday could be intense by throwing obstacles and curveballs our way, things should really start falling into place by the time the Gemini moon trines Saturn in Aquarius on Wednesday.

On June 10, the month’s new moon and solar eclipse rise in the sky, which almost exactly conjoin Mercury retrograde. This triple conjunction of the two luminaries and Mercury can increase mental activity and curiosity, highlighting all communication-related topics. It also connects the mind with the heart, so we can expect emotional sensitivity and mood swings. New moons are usually great times to begin something new, but this isn’t one of them because Neptune squares this triple Gemini conjunction. Communication could also be foggy and confused, so watch out for tricky and delusive vibes around this time.

The fourteenth brings the energy to a climax as Saturn perfects its second square of the year with Uranus. By now, we might be getting an idea about which structures of our lives are due for revamping. Looking back to mid-February might be also useful in terms of figuring out where this story is going. The third square between these two giants will bring it to an end in late December. You’ll know this square is affecting you if you have any natal points or planets between 8 and 18 degrees of the fixed signs (Taurus, Leo, Scorpio, or Aquarius).

The third week of June ends with a complete shift in energy as the sun enters Cancer and the summer solstice arrives on June 20. With the sun in a different sign and away from the nodes of destiny, eclipse season is officially over. On the same day, mighty Jupiter stations retrograde in Pisces, its traditional home sign, while receiving an opportune trine from the Virgo moon. When a planet is stationing retrograde, it impregnates the overall energy of the chart. This could very well mean that the summer’s energetic blueprint will be one of growth, inspiration, and expansive creativity.

And more good news arrives within the next few days. On the twenty-first, Venus in Cancer trines Neptune on Pisces, bringing the promise of tenderness and sparkly romance. Mercury ends its retrograde the next day, and the Cancer sun trines Jupiter in Pisces on Wednesday. This combination of transits seems super positive for pitching a book, launching a podcast, or working on a project dealing with communication, art, or creativity.

June 24 brings this month’s second lunation, which is a full moon in the diligent sign of Capricorn. During this full moon, both luminaries are forming positive aspects with Jupiter retrograde in Pisces, which is very fortunate—yes, even if Jupiter is retrograde! Under this full moon, we can expect to receive good news around career-related matters. Raises, promotions, and all kinds of upgrades and good endings are on the horizon. If you have any natal planets or points in the early degrees of Cancer, Capricorn, or Pisces, you’re in for a treat!

The last big event of the astrology of June is Neptune going retrograde in Pisces on the twenty-fifth. As it usually happens, this retrograde awakens us from our fantasies into some harsh realities. Over the next few months, we might have to face some cold, hard facts and look inside ourselves to find answers.

This article comes from the Internet and does not representnew astrological signs dates 2021Position, please indicate the source for reprinting：http://www.cbd-sz.com/06/623.html
7like
Label:feb 7 zodiac sign

5 Cancer Season Dates to Tap into Your Intuitionvirgo october 2021

Mercury Retrograde in Gemini Is Sure to Be a Wild Ride!free will astrology capricorn