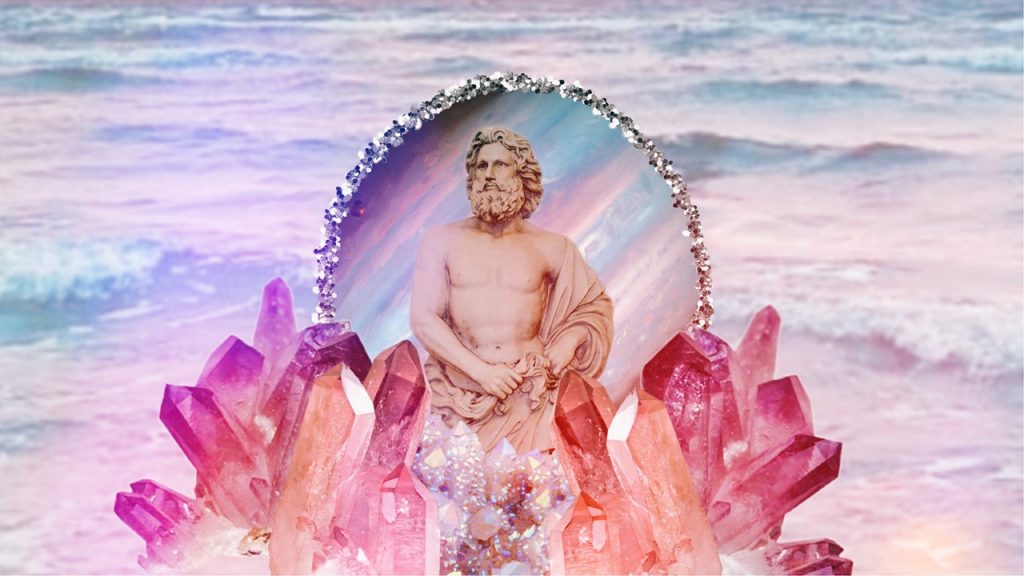 Jupiter will begin its journey backwards through the cosmos when it stations retrograde on June 20, at 2°11’ of Pisces. The energy of this retrograde carries on for about four months, until it stations direct and we catch a break on October 17, at 22°20’ of Aquarius.

Jupiter is one of the most beloved planets in astrology, acting as a beacon of light while spreading optimism, luck, and joy across the cosmos. This planet also represents abundance, travel, and philosophy—so what happens when the planet that loves to move forward and expand encounters a retrograde?

In 2021, Jupiter will travel through two signs while in retrograde, beginning in Pisces and ending in Aquarius. At the very beginning of this retrograde, the Pisces energy could leave us in a daze, and perhaps overly optimistic about opportunities or people that aren’t exactly as we perceive them to be. Once Jupiter backs into Aquarius, we will begin to gain more information, but it might not always be what we’d hoped for. We may also see a spike in political disagreements, and at the same time, will feel drawn to a specific cause while unsure of how to create real change.

While us Earthlings are subject to the energy of the planets at all times, these vibes become especially pronounced when we look into how they interact with one another in the cosmos. There are some dates during this retrograde that will cause Jupiter’s energy to feel more present. On June 23, Jupiter forms a supportive aspect to the Cancer sun, allowing us to feel optimistic, nurtured, and secure. July 12 will allow us to talk about our emotions constructively, as Mercury and Jupiter connect through a harmonious trine. On July 22, go easy when it comes to romance, as an opposition with Venus could tempt us to nag our partners or point out their flaws. A few days after, an opposition to Mars forms on July 29, so try not to over-exert yourself.

How to Handle Jupiter Retrograde

Watch out for hurt feelings on August 10 and August 19, as Jupiter receives an opposition from Mercury and then the sun in Leo—the energy here could become a grim reminder on how words are sometimes hurtful. September 6 is a great day for love, as Jupiter forms a trine with Venus in Libra. The romantic vibes will continue on September 20, when a trine to Mercury is formed, so don’t be afraid to tell that special someone how you feel! October 15 brings the last significant aspect of this retrograde, as Jupiter is met by the moon through a conjunction, while forming a trine to the sun, giving us all a chance to find balance and feel good about ourselves.

Jupiter’s retrograde motion will affect each sign differently, depending on how the energy is hitting them personally. Things could get a little intense for Aries, Leo, Sagittarius, and Pisces signs—so remember to be gentle on yourself and others. Virgo, Scorpio, Capricorn, and Gemini will need to pace themselves, as challenges will likely pop up during this time. However, there can be some benefits to this planetary retrograde, which will likely be most felt within Taurus, Cancer, Libra, and Aquarius natives.

Learn all about planets in retrograde! 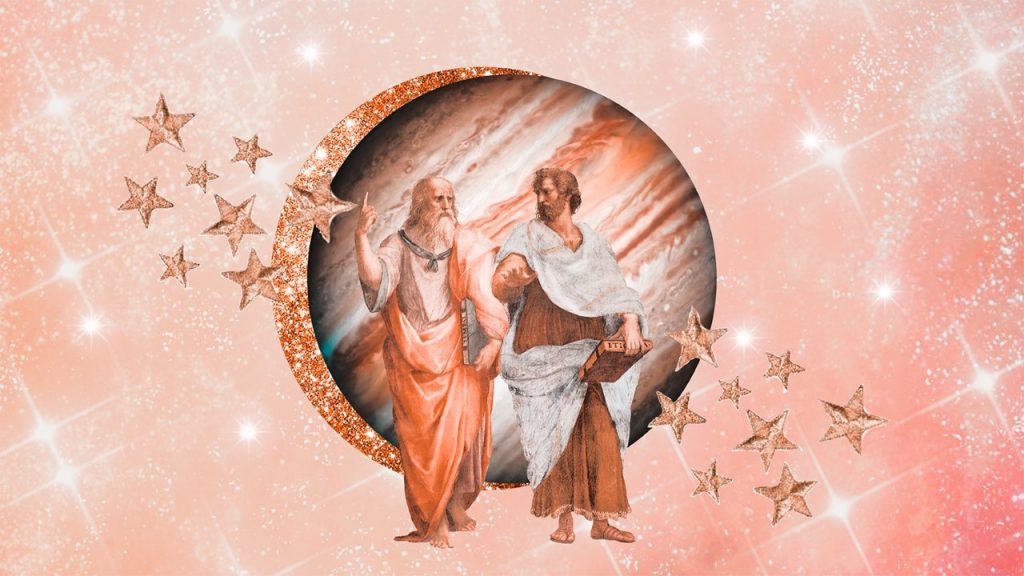 The first part of this retrograde will put you in a reflective mood, as you examine decisions you made when you were younger, or even events from the past that felt unfair. Never fear, Aries, you’ll be back to your lively and outgoing self towards the end of July. Though, you may find yourself looking at your extended friendship circle with a discerning eye, allowing you to tighten your group of friends in favor of the ones who are the real deal.

You may feel burnt out from going out or seeing friends by the time August rolls in, so permit yourself to step away from social events for a bit. While you’re spending less time amongst your community of pals, your focus will likely shift toward career goals. You may have big plans for the future, but remember that manifesting your dream job takes time. By taking classes, networking, or even speaking up more at the office, you’ll be able to create luck for yourself—just don’t get frustrated if the payoff isn’t immediate.

At the beginning of this retrograde, you’re most likely busier than ever and very focused on your career. Remember to pace yourself so you don’t burn out and find yourself exhausted. Luckily, the energy will shift once Jupiter travels backwards into Aquarius. Once positioned under the sign of the “Water-bearer,” you’ll feel calmer and in a more philosophical headspace. Use this time to reconnect with your spiritual side, and it may be a good idea to implement a new meditation regime.

The beginning of this retrograde will be quiet for you, and you’ll likely be in a more reflective mood. Your mind will look for ways to expand during this time, but don’t get frustrated if the outside world has a hard time catching up. Toward the end of July, your focus will shift toward how you’ve changed throughout your life, and what you want your future self to look like. The energy might get heavy from time to time, but as long as you can release the things that are holding you back, you’ll come out of this retrograde on top!

Your romantic relationships could feel a little intense or restrictive during the first month of Jupiter’s journey backwards, regal Lion. You could begin to feel as though you’ve outgrown someone you were or are currently involved with, and might be on the hunt for a way out. Luckily, this energy will lighten significantly, when Jupiter makes its way into Aquarius. Once this energy shifts, you’ll either feel more at peace with your significant other, or on the prowl for your next great love.

Things could get messy in the romance department for you this retrograde, darling Virgo. Mild annoyances created by your partner could grow in intensity, irritating you more than before, which could, in turn, cause you to nag or lash out against your significant other. You’ll want to watch out for the level of standard you expect from both yourself and others. This retrograde could cause you to be harder on yourself than normal, so try to check yourself if you get overly-critical, and find ways to love yourself and those around you.

Somehow, other people’s issues could become your own during the first month of this retrograde, as people turn to you for solutions to their problems. At first, you may be in the mood to help, but eventually, you’ll have to back off and decide to look out for yourself instead. Don’t feel bad about taking the time to address your own needs before others. A creative rush could also come your way toward the end of July, so make sure you’ve got some art supplies on hand!

You may find yourself in a creative or expressive funk during the first part of this retrograde, darling Scorpio. You’ll be in the mood to put yourself out there, but might not always receive the validation you were seeking. After a series of hits and misses when it comes to putting your thoughts on the table, you’ll likely decide to take a little time out to recharge and rethink your strategies. Toward the end of July, you’ll feel like spending more time at home in solitude. Just remember to come out for air every now and then, as too much time alone can get weird for even the most solitary scorpion.

Brave Archer, no one appreciates honesty more than you, and honestly—this retrograde won’t be great for you. With Jupiter as your ruling planet, you’ll have a front-row seat for this retrograde’s cosmic show. A depletion in energy levels is common when your ruling planet is retrograde, so plan for plenty of downtime to avoid burnout. You’ll also want to watch your words during this retrograde, take time to think things through before communicating on serious topics, as speaking impulsively could backfire on you right now.

People could test your boundaries during the first month of this retrograde, which we all know is not your favorite thing. Lines could get blurry for you when people begin to pry into your personal life conversationally. Remember that it’s always okay to tell others when you’d rather not discuss something, just remember to be polite and warm in your delivery. Unexpected financial issues or expenses could come into play toward the beginning of August, so try not to lose heart if you have to tap into your beloved savings account.

Watch your spending habits during the first month of this retrograde, lovely Aquarius. Don’t count on money that’s supposed to come in the future when you’re browsing the shoe section, and only spend what you can budget for in the moment. Once Jupiter switches signs from Pisces back into Aquarius, you’ll begin to feel its effects more intensely. You may find that the issues you’ve been putting off within your personal life can no longer be ignored. Take each problem that arises in stride, as long as you’re willing to change and work on yourself, the universe will find ways to reward you.

This retrograde begins in your sign, Pisces, which could make you feel as though you’re swimming against the current. Your personal life might go topsy-turvy during the first month of Jupiter’s journey backwards, which threatens to leave you feeling a little lost in the clouds. Once the planet of luck and expansion moves into Aquarius, the energy will shift for you, and you’ll likely decide to step back from life for a bit, to reflect and engage with any healing you need to do.

This article comes from the Internet and does not representnew astrological signs dates 2021Position, please indicate the source for reprinting：http://www.cbd-sz.com/06/618.html
6like
Label:november 14 astrological sign

Totality is the whole thingfebruary astrology